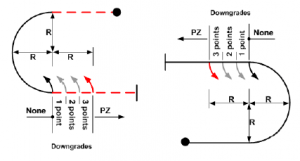 4.4.1.1. The absence of a distinct horizontal start or finish to a figure will reduce the mark by 1 point in each case for each figure affected.

4.4.1.2. At the initiation or completion of every figure, each deviation from a wings level, horizontal flight path and from a heading parallel to the relevant box axis, in accordance with paragraph B.6.1.1, will attract a reduction of 0.5 point per 2.5º of deviation, 1 point per 5º of deviation.

4.4.1.5. Over-rotating a roll and rolling the wings back again must be penalised by 1 point per 5º of over-rotation, even if the correct geometry is resumed afterwards, and no matter how quickly the correction is made. The same provisions apply when, at the end of a loop or part-loop, the aircraft's nose is pitched beyond the desired line and then brought back again.

4.4.1.6. If within a figure two or more lines have to be of the same length, the basis for judging is the first line flown. Any observed variation must be penalised by reducing the marks in accordance with paragraphs B.8.1.6 and B.8.1.7.

4.4.2.1. A mark of "Perception Zero" (PZ) should be given if the Judge considers that the figure is incorrectly flown in respect of a criterion that is a matter of subjective perception, rather than clearly demonstrable fact. For example, if the Judge considers that a flick roll or spin never started proper auto-rotation, that a tail slide did not move backwards by the required amount or that a rolling turn included a flick roll.

4.4.2.2. The Chief Judge should check that PZ’s are applied only to manoeuvres where a perception error has been seen, and that a plausible reason has been given. The CJ has no other input regarding the presence of PZ’s; they are subjective decisions made by individual judges and there is no requirement to review or “Confirm” them.

4.4.3.1. A mark of “Hard Zero” (HZ) should be given if the Judge considers that the figure is incorrectly flown in respect of a geometrical error, as listed below, that is clearly verifiable as a matter of fact. A mark of “HZ” will be given to a figure if:

e) any other single deviation in geometry/flight path/attitude/rotation (Rule 4.4.1) reaches 90º;

f) the pre-stated figure or any part of it is omitted;

g) any part of the figure was not visible as it was flown in or behind cloud. If the figure was visible to a majority of judges, then the Chief Judge should instruct unsighted judges to revise their mark from "HZ" to "A".

4.4.3.2. If figures subsequent to the Hard Zero mark are correct and are flown in the correct direction, they shall be marked in the normal way.

4.4.3.3. During a repetition flight (paragraphs 3.6.4.6.e) or 3.12.2.9) the figures before the break must all be flown correctly. If a competitor omits or flies such a figure incorrectly, so as to gain an unfair advantage, the mark awarded for that figure during the first flight will be reduced to a “HZ”.